The distribution VM has taken care of most things necessary to configure and run ONOS. What still needs to be done is the routing application within ONOS. At this time, Atrium does not support the ability to change configuration at runtime, an issue which is known. Therefore, it is necessary to pre-configure the controller/app with router-interface addresses and expected BGP peers before launching ONOS. For an example configuration, please see the network shown below. 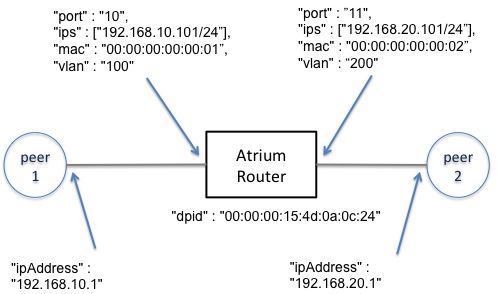 The configuration shown above needs to be entered in addresses.json and sdnip.json.

addresses.json, which is located in the folder Applications/config, is a file mainly used for ARP handling and router interface IP/VLAN config. 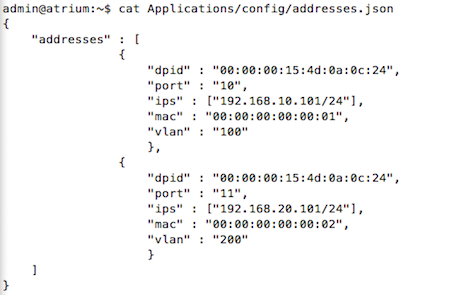 With reference to the topology diagram, the addresses of our router-interfaces are being specified. The "dpid" refers to the OpenFlow datapath-id of the data-plane switch, "port" refers to the data-plane switch port (the OpenFlow port number), "vlan" is one vlan-id configured on that port, "ips" are the set of ip-addresses assigned to that port/vlan, and "mac" is the mac-address assigned to that port.

A few things to note: 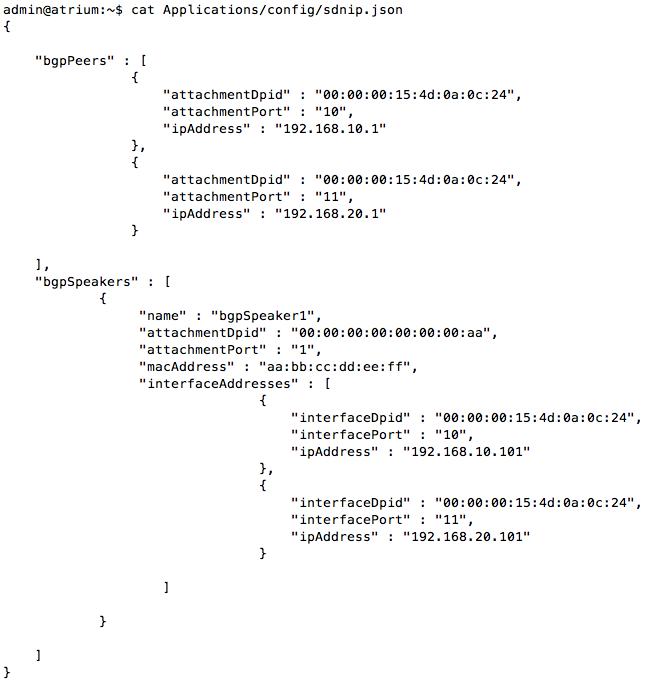 For the "bgpSpeakers", the app needs to know the Atrium router's interface IP addresses in the "interfaceAddresses" section. (Do not change information under "bgpSpeakers" like "attachmentDpid" and "attachmentPort".)

Then, ONOS configuration is complete.

Launching ONOS for a Test

If launching ONOS for testing, user can run the following command from the shell (over ssh). If deploying the router, however, user should follow the instructions below.

To ensure that there are no remaining processes left over from previous runs, please run "./router-cleanup.sh".

ONOS may already be running. Use the following command to ensure that ONOS has not started automatically.

Then, to launch, run "ok clean" (onos-service start/stop can also be used to launch ONOS.)

To check, enter the command "log:tail" on the ONOS (karaf) CLI.

Scroll through the log and verify that the lines, like those in the figure below, can be seen.

The "Router dpid" should be the one the user just configured in the config files. The "Control Plane OVS dpid" will be explained in the next section.

For deployment, it is best to launch ONOS within a terminal multiplexer like tmux because, among other things, tmux gives user the ability to maintain persistent working state on remote servers (in our case, on the distribution VM) while detaching and re-attaching at will.

For more on tmux, please see this tutorial.

While still connected via ssh into the distribution VM and having already configured the controller but before ONOS is launched, user should enter

This command should bring up a window like the one shown below. Notice the "bar" at the bottom, identifying the tmux session.

To detach from the window, enter 'Ctrl-b' followed by 'd'.

User can view the active tmux windows by typing:

To reattach to the session: